skip to main | skip to sidebar

The most known Pan–Hellenic Symbols of the Macedonian Kingdom. 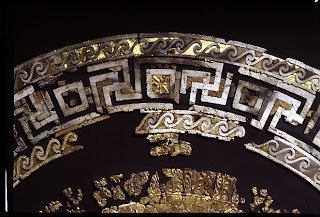 Parts of the Phillip ivory shield that found in Vergina Tomb. You can see clearly the two Pan-Hellenic symbols: The 16th Sun/Star(Vergina Sun) and the Meander(Greek key). The shield itself can be found in the museum of Vergina in Central Macedonia of Greece. 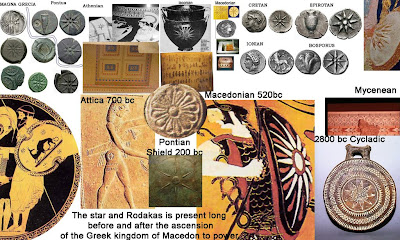 Even Achilles has the rayed star on his armory and many of the ancient Greek Gods and Goddesses. 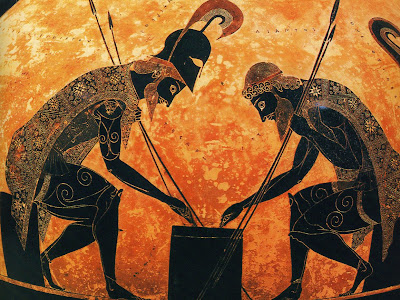 The symbol is the continuation of the oldest ancient Greek symbol of the Sun, which also predominated on the Acropolis of Athens. 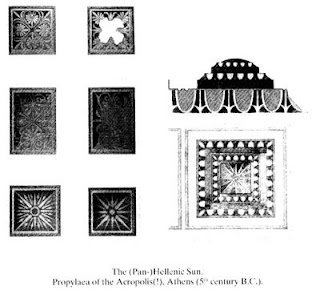 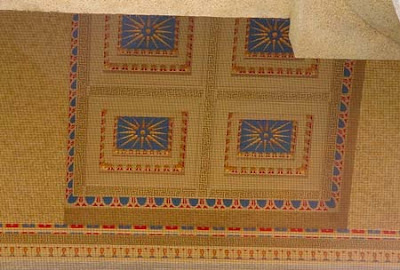 Inside the outer wall of columns of the Parthenon in Nashville, Tennessee. This «Parthenon» is a full-scale replica of the original Parthenon in Athens. It was built in 1897 as part of the Tennessee Centennial Exposition.

The Sun was also the most important symbol of the origin and continuation of all Hellenes: Arcadians, Athenians, Thessalians, Macedonians - their first God, before the Olympian Gods. The choice of this symbol was obvious and natural: one of the most vital elements on earth is the Sun - the source of life.

Many people call it “the Sun of Vergina” or the “Macedonian Star” but this is only a partial truth. This symbol has a history of more than three thousand years. It was the original logo or sign which the Proto- Hellenes used as their emblem for many centuries. The Macedonians simply continued the ancient Proto-Hellenic (Homeric) heritage or tradition of their forefathers.

From the late 17th century AD, and in particular the 18th century, classical Greek civilization began to attract the ever-growing interest, curiosity and imagination of western Europeans. One manifestation of this was the numerous “journeys of discovery” undertaken by various scholars to the soil of “rediscovered Hellas” itself, which was then still part of the Ottoman Empire. Two such individuals were the young architects James Stuart and Nicholas Revett, who in 1751 arrived in Attica and immediately set about accurately recording the architectural details of surviving buildings of classical Athens and its surroundings.

The most known Rayed Star is the ancient Greek Macedonian symbol of Vergina. The “Vergina Sun”, “Star of Vergina” or “Argead Star” is the name given to a symbol of a stylised star or sun with sixteen rays. It was unearthed in 1977 during archaeological excavations in Vergina, in the northern Greek province of Macedonia. 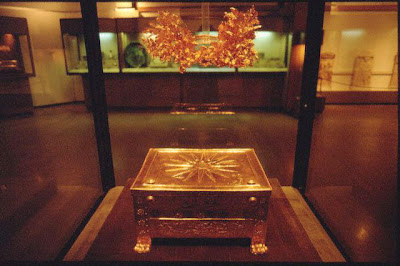 The star is also in tombs of the kings of the ancient kingdom of Macedon and described as the symbol variously as a "star", a "starburst" or as a "sunburst". In the well know larnax on which it appears belonged to Greek King Philip II of Macedon, the father of the Greek Alexander the Great III. The larnax is on display at the archaeological museum in Vergina, where it was found. Another version of the Vergina Sun, with 12 rays, was found on the larnax of Olympias, the mother of Alexander the Great. Only the Greeks can understand the inner esoteric hidden ancient meaning of the Rayed symbol and, in this movie a hit of it, is presented.

The Macedonian Tomb of Lyson and Kallikles at Leucadia. The tomb is dated to ca. 200 B.C. The tomb was accidentally discovered in 1942 at Leucadia Emathias and subsequently excavated by Ch. Macaronas. The results of the investigation were published in a book by his collaborator, Stella Miller, in 1993.

Depictions of Macedonian shields prove that their surface was decorated in relief. This is the case, for example, with the shields carved on the balustrade of the Alhena temple al Pergamon, where the central convex part of the shield was covered with concentric circles with patterns and an eight-ray star in the middle. One of two shields shown on the walls of the tomb of Lyson and Collides is decorated with a sixteen- raystar and similar shields occur on the walls of the Agios Athanasios tumulus (Thessaloniki) excavated in 1994 .

A Greek key pattern or meander, symbolizing the flow of a river, often is found in stylized form as a border decoration on rugs, ceramics, and walls. A meander is similar to the Chinese sign for "returning," thus it is also a symbol of rebirth and eternity.

About 900 B.C. a geometric rectilinear decorative style of triangles, chequers, and meanders began to dominate. These elements were organized in rows of separate bands, encircling the vase. During this period in Geometric Greece, the meander became the dominating motif on the vases. From its origin in the Palaeolithic onward the meander, a rectilinear geometric design, was symbolic of water, perhaps because of its resemblance to waves, lightening, and rivers. The meander was adapted, or perhaps reinvented and made more complex by the vase painters of Athens. Rectilinear decorations of meanders, triangles, and rectangles, soon covered the vase, like a mesh or mosaic design, becoming one with the vase itself. The shape of the vase was influenced by the design and became more sculptural and architectonic.

Archaeologists have found what we have come to call the Greek key pattern on artifacts whose dates preceded ancient Greece by thousands of years. Anthropologist Marija Gimbutas found a meander pattern on a figurine in the Ukraine that dates from 18,000 to 15,000 BCE. Many believe the root of the labyrinth pattern derives from the shifting, twisting path of the Meander River of Phrygia in the Mediterranean region of present-day Turkey.

One of the most important finds made during the Vergina excavations is the splendid Hellenistic Palace, which dates from the last 3rd of the 4th c. or the beginning of the 3rd c. BC 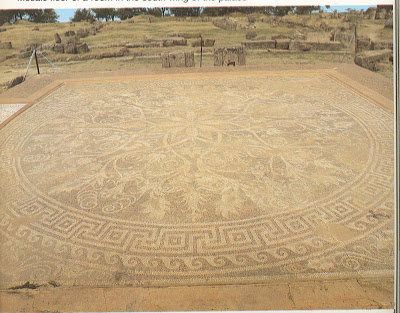 The enormous peristyle, which formed four great porticoes around the courtyard, consisted of 60 Doric columns. In the round chamber which Heuzey named the 'tholos') to the east of the propylon was found a dedicatory. The 5 rooms on the south side had mosaic floors, one of which - executed in pebbles - survives in excellent condition. You can see one from them with the Greek key pattern surrounding.

Finally the most important archaeological found that combine Greek Key/Meander and Sun/Star is the Ivory Shield that was found in pieces in Philip’s tomb at Vergina archaeological site. The arduous process of restoration took several years. It is a unique masterpiece of the 4th century. You can see clearly these pan–Hellenic symbols in the picture at the beginning.

First of all I want to apologize from my bad English grammar. As native Macedonian my mother language is Greek and not Slavic as some of the postmodernists professors claim arbitrarily.Enjoy the blog.

In an Open Letter to President Obama, 370 Professors ....

respectfully request to intervene to clean up some of the historical debris about Macedonian History left in southeast Europe by the Bush administration.
More in macedonia-evidence.org

Akritas
First of all I want to apologize from my bad English grammar. As native Macedonian my mother language is Greek and not Slavic as some of the postmodernists professors claim arbitrarily. Our common international society cannot survive when history is ignored, much less when history is fabricated. FYROM, must to understand that it cannot build a national identity at the expense of historic truth.